The faculty members who taught us during the MMS program are from all over the world, representing Chile, Mexico, Italy, China and the United States. My classmate, Savannah, has previously written a post about three professors we had in the Fall, but I wanted to focus on the global diversity and the very unique ways of teaching that some of these professors bring into the classroom!

Alessandro Arlotto, our professor for Quantitative Business Analysis originally from Italy, was teaching us about probability. To mix things up a little he brought M&M’s for everyone. The M&M’s did not come for free though.

We had to figure out the probability that we receive more of our favorite M&M’s, and to do so we counted how many of each color we got. We then compiled the data for the entire class and calculated the probability our pack would contain more M&M’s of our favorite color than any other color. So whether we loved probability or not, everyone sure had a lot of fun in this class and enjoyed the M&M’s! If that wasn’t enough, he had music playing at the beginning of every class so class always started in a great mood regardless if it was 9 a.m. or 1:30 p.m., just after lunch. 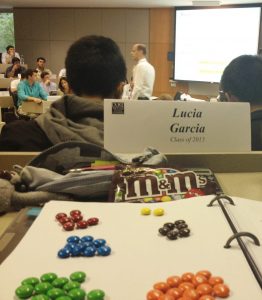 Pino Lopomo, also originally from Italy taught us Fundamentals of Business Economics back in September. When it came to discussing collusion and learning why it would never work even though everyone would benefit from it, we did an in-class experiment.

The class was separated in half, and we used a program in which we had to try to virtually produce anything in the most efficient way, which meant each group would produce a quantity of five. We could all talk to each other and agree to each produce only five, and as a class get the highest grade possible. However, if one group produced 10 they would be better off than the other and as a result, receive a slightly higher grade.

The decision to how much to produce was secret, so no one knew which group ended up breaking the collusion deal. From this interactive and real experiment we quickly learned that if people, or companies, can get ahead they will do so even if it means breaking a preestablished collusion agreement. This is why perfect markets do not exist, and while Pino could have simply said so in a few minutes, the activity made sure everyone actually understood the collusion concept and why it doesn’t work. 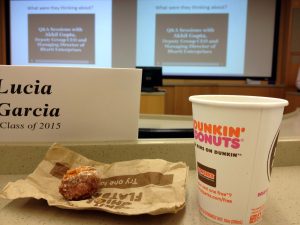 Another very interactive class was Principles of Strategy with Ramon Lecuona Torras, originally from Mexico but who recently relocated from England. He brought us coffee and doughnuts to enjoy during a class discussion, but the most fun was the final class, which was a review for the final exam.

We all showed up and were placed into soccer teams. Through several rounds, we had to make decisions on how many players to buy and sell and for what prices. Using the concepts we learned in class, we could come up with a strategy. After each round we were able to see two results: one of how each team performed financially and the other of how they performed in the league. At the end, the winning team actually won a trophy, which Ramon had engraved especially for our class. Needless to say this last class no one will ever forget!

As if fun activities and occasional food were not enough to make classes enjoyable, when we transitioned to DKU we had professors bringing in relevant props when discussing certain cases. During Managerial Accounting, Professor Jennifer Francis (also senior associate dean of programs) brought an actual Berkshire teddy bear when discussing the Berkshire case! What better way to pay attention that staring at this cute teddy bear dressed up in a suit sitting in the middle of the classroom?

For Operations and Supply Chain Management, we spent a class discussing Toyota and the Toyota Production System, so Li Chen, originally from China but now living in the United States, brought in a miniature Toyota car that we got to play with—it made noises and we could even open its doors!

As you can see, our classes are hard work yet fun, and we owe it to our incredible international faculty who are always looking for engaging ways to teach.