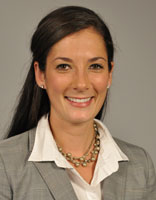 I graduated from the Daytime MBA program in 2014 and served as MBAA Vice President of the class.